Calculating relative costs of study is of course a tricky business. Tuition costs vary (in some cases quite substantially) within a given country from one institution to another. And the costs of living and studying in a country rise and fall as foreign exchange rates change over time. We covered this topic in a recent post on pricing and price sensitivity.

Meanwhile, a recent item from the Foreign Students blog, for example, said of tuition ranges in the UK alone:

“Though international undergraduate fees start at just £7,450 for lecture based courses, the annual cost goes as high as £35,000 for medical degrees at King’s College London… There is a similar range of costs for postgraduate students, with international students being charged anything from £7,900 to a massive £38,500 (for postgraduate medical students at Queen Mary University London).”

Nevertheless, the summary averages reported by HSBC (please see the complete survey table below) do indicate some interesting cost dynamics at work, particularly with respect to the relatively high cost of living in Australia.

It appears it is this cost of living factor that is helping to make Australia the most expensive destination in the HSBC survey, especially relative to the US and the UK. 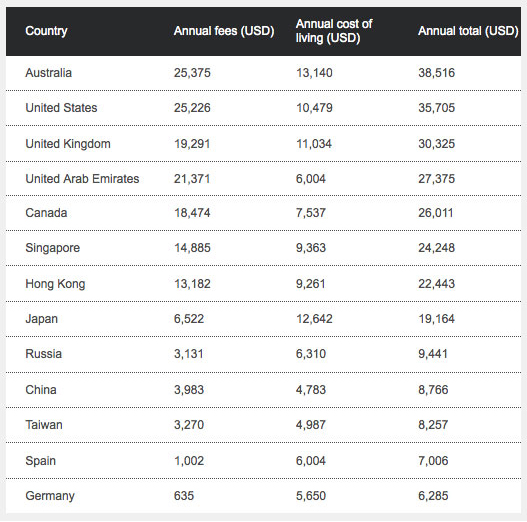 Thomson Ch’ng, the president of the Council of International Students Australia, was recently quoted in The Guardian on the issue of living costs: “The high cost of living was the big factor for foreign students, despite Australia’s geographical advantage in attracting students from the Asia-Pacific region.”

And Ch’ng argues that governments and education providers need to take action:

“Analyse the contributor of the high cost of living and burden created to international students such as travel cost, accommodation cost, visa pricing, health insurance, food and meals, then take action to address these, including providing concessions and subsidies to those costs.”

Mali Sarwar, HSBC’s Global Head of Wealth Development provided a broader commentary on the survey’s findings: “With rising affluence, particularly in developing markets, and an increasingly competitive workplace that demands quality skills and a global outlook, we expect appetite for international education to continue to grow. Even though the market for higher education remains segmented and therefore mispriced at an international level, the cost is going up everywhere as government subsidies are rolled back.”

And Betty Miao, Executive Vice President, Retail Banking and Wealth Management, HSBC Bank Canada added: “Families with these aspirations need to plan ahead… Those who wish to educate their children overseas need to consider more factors than simply tuition fees, such as living costs, exchange rates and inflation in their estimates of total costs. On average, living expenses can comprise at least a third of total costs and parents need to budget for travel home during school holidays.”

See our two-part series for tips on how to appeal and interact with parents throughout the student recruitment process.

This entry was posted in Australia, Australia/Oceania, Higher Education, Most Popular, Regions, Research.