Like many destination countries for international students, New Zealand relies heavily on major world markets, notably China and India, for its international enrolment base. But the New Zealand government has also signaled its intentions to target specific global regions for the development of closer trade and cultural ties.

Two major strategy statements have been released over the past month under the “NZ Inc” banner, targeting the 10-nation ASEAN block and the six Middle Eastern states of the Gulf Cooperation Council (GCC).

NZ Inc is an umbrella group representing a broad cross-section of New Zealand government ministries and agencies, including Education New Zealand, with an interest in international affairs and trade.

“The strategies are plans of action for strengthening New Zealand’s economic, political and security relationships with key international partners. They target countries and regions where New Zealand has existing or emerging relationships, and there is potential for significant growth.

The strategies look at the future possibilities in these markets over the next 10-15 years, then set ambitious, five-year goals, as well as the steps the Government will take, often working with business, to achieve them.”

For example, the ASEAN strategy – New Zealand’s ASEAN Partnership: One Pathway to Ten Nations – sets out that:

“The Association of Southeast Asian Nations (ASEAN) is a grouping of ten economically diverse Southeast Asian nations… [that] have valued the quality and abundant goods and services we produce, such as food, education and engineering know-how. As a result, our exports to ASEAN have risen from 4% to 10% of our total exports. New Zealand now trades more in a week with ASEAN than we did in a year in the early 1970s.” 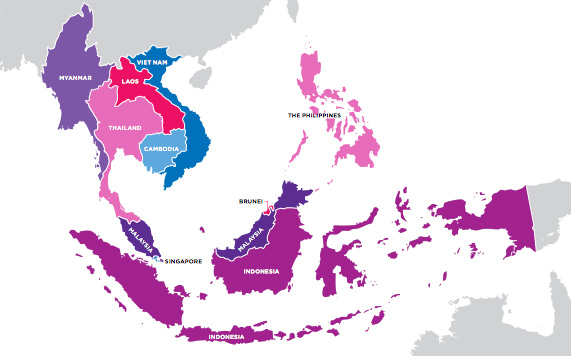 With a combined population of more than 260 million (roughly 60% of which is under 35 years old), the International Monetary Fund is projecting annual growth of between 5–6% for the 10-country ASEAN region for the period 2013 to 2017, according to Education New Zealand.

And the NZ Inc strategy establishes the following targets for further growth to be achieved by the end of 2017:

As these top-line goals suggest, education will figure prominently in the ASEAN strategy, which notes:

“[New Zealand] offers world-class education at a time when the increasingly affluent middle class across Asia wants their children learning safely in English language institutions as a passport to rewarding jobs and global citizenship.”

While New Zealand’s ASEAN strategy will no doubt further focus the efforts of the country’s educators, needless to say New Zealand is currently active and invested in the region.

Education also has a big role to play in NZ Inc’s regional strategy for the Gulf which notes that, “Education is a cornerstone of the New Zealand/GCC relationship. From 2,143 students in 2006, this grew to a peak of 6,343 in 2011.”

The strategy statement sets out a key goal of making New Zealand a preferred destination for students from the region and calls for further action to attract more students from Gulf countries:

This includes working with New Zealand polytechnics to meet the demand for vocational and technical education as well as summer school programmes. There are also opportunities for receiving Gulf government scholarship students in areas such as tourism, police, health, defence, aviation, and public administration. As the education relationship matures, increased opportunities are likely to arise around academic exchange and science cooperation, and alumni communities in the Gulf will become important advocates for the relationship.

As well as sending students off-shore, Gulf States are focused on improving education delivery in their own countries. New Zealand education services firms, as well as universities and institutes of technology, are well placed to partner with Gulf States.

This renewed focus in ASEAN and the Gulf Region is taking shape as Education New Zealand has also released an updated Statement of Intent for 2013–2016. This follows earlier, but equally ambitious, goal statements for the expansion of the country’s share of the global education market.

The new Statement of Intent provides a compact summary of the current position of New Zealand’s international education sector.

“International tuition revenue rose by 2% in 2012 compared to the previous year. This is the highest level of revenue recorded since 2004. However, the number of fee-paying international students in New Zealand fell by 6% in 2012. Excluding the Canterbury region, the number of students in the rest of the country decreased by 3% in 2012. This follows a 1% decrease in 2011, reflecting that we are operating in a challenging environment. The number of Chinese and Japanese student enrolments rose in 2012. China remains the single most important source country, providing 27% of New Zealand’s international students.”

The economic impact of education exports in New Zealand, as reflected in contributions to GDP by export education sector. Source: Education New Zealand.

The updated statement establishes two “intermediate outcomes” – that is, specific near-term goals, for the period 2013–2016.

Education New Zealand aims to achieve these goals by:

It appears that many of these activities will be concentrated within Education New Zealand’s established Tier 1 and Tier 2 groupings of international markets. These include Indonesia (Tier 1), Malaysia (Tier 2), Thailand (Tier 2), and Vietnam (Tier 2) from the ASEAN block as well as a broad regional Tier 2 target – the Middle East region – that in turn aligns well with NZ Inc’s new Gulf region strategy.