Recently, Mexico and the United States announced new education links and agreed that improved student mobility in both directions could produce strong long term benefits for both countries. Today, ICEF Monitor takes a look at Mexico’s higher education sector, its relationship with the US and other countries, and offers tips on how to access the Mexican market.

Mexico and its northern neighbour

In early May, Mexican president Enrique Peña Nieto and US president Barack Obama jointly announced the formation of a Bilateral Forum on Higher Education, Innovation, and Research. The goals include:

“In order to compete with the world, specifically the highly developed countries where science and technology have been the target of their efforts and investment, it is fundamental that we have well-prepared youngsters with the skills necessary to give our economic development a greater strength and a greater capacity.”

To that end, both governments have pledged to build upon the educational and research linkages that already exist through federal, state, and local governments, public and private academic institutions, civil society, and the private sector.

In addition, Obama has outlined what he calls “100,000 Strong in the Americas” – a plan to increase the number of exchange students in all of the Americas:

Conversely, many US students are unaware of the opportunities available in the hemisphere, and US colleges and universities are not set up to send large numbers of students abroad, facing obstacles such as how to transfer course credits, arranging tuition agreements, and how to handle off-cycle semesters.”

According to IIE’s 2012 Open Doors Report, in the 2011/12 academic year, 13,893 students from Mexico were studying in the United States. While this represents a 1.3% increase over the previous year, it is still considered to be a low number when one considers, for instance, the 72,295 students in the US from South Korea.

Mexican enrolments sagged in 2009 as the global recession took hold, however indicators are moving upward again and Mexico currently sends the ninth most international students to the US. About 54% are undergraduates, and approximately 40% study business and engineering.

Enrolment trends of Mexican international students in the US, 2004-2012 from World Education Services.

Looking in the other direction, the number of US students studying in Mexico peaked in 2005/06 at 10,022. But by 2010/11 the number was only 4,167, putting Mexico behind such countries as Costa Rica and Argentina. Several factors affect those low numbers, including concerns about quality and security, discussed below.

Higher education institutions in Mexico serve over 2.5 million students, which is about 30% of the university age population, and the government hopes to expand this to 50% by 2020. However, some observers note that fee increases at universities over the last few years have the potential to cause more students to seek opportunities abroad. 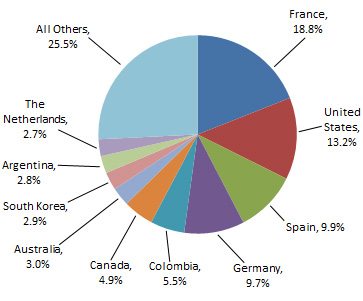 Places of origin of international students in Mexico, from the 2010/11 Patlani Report.

On the outbound side, the number of Mexican students studying overseas has grown substantially in recent years to nearly 27,000 in 2010. Mexico has one of the lowest university participation rates among OECD nations, but as more Mexicans move economically into what is defined as the middle class, education is increasingly becoming a priority, with consumer expenditure on education rising 43% between 2002 and 2011.

The global recession that affected Mexico’s outbound student mobility to the United States was less evident in other countries that traditionally host large numbers of Mexican students. From 2008 to 2010, for example, Spain, France, Germany, and the UK all defied downward pressure from the recession to post slight increases in Mexican enrolments.

Mexico’s sending levels to Spain are particularly strong. For all levels of study, Spain is Mexico’s second favourite destination after the US, followed by France, Germany, and the UK. But on the postgraduate level, the UK suddenly emerges as a stronger partner, receiving the second most postgrads in 2011/12, according to figures from HESA.

“In the past decade, more than 50 million people have worked their way up the social ladder and into the middle classes – an increase of more than 50% that means now almost a third of Latin Americans are classifiable as middle class. This generation has high aspirations for their children and wants to see them secure the best education possible.

At the same time, most governments in the region have started addressing low rates of higher education participation – more scholarships, increased sponsorship and greater social mobility has resulted in half a million more people enrolling in higher education in 2010/11 than in 2006/07 in Mexico alone.”

Mexico is expected to develop a huge market for online learning due to President Nieto’s promises of creating a national online virtual university. Nieto’s planned National Digital University is one plank in a strategy to increase university enrolment by 50% by 2018, which would mean creating another 1.5 million spots.

The idea of a digital university fits with rising trends in Internet usage. About 40 million Mexicans, most of them 18 to 34 years old, use the Internet daily. MOOC provider Coursera sees growth potential as well, linking with two Mexican universities – Tecnológico de Monterrey and La Universidad Nacional Autónoma de México – to offer online courses.

In terms of social media, Mexico’s Facebook usage has exploded in the last two years, ranking the country as one to watch on the company’s growth charts. Mexico is also in the top 15 countries for Twitter growth. Currently 90% of all Mexican Internet users have a profile on at least one social media site.

A Nuffic Neso Mexico survey revealed that for Mexican students, the Internet is the most important source of information for international schooling, indicating that in the future, this is where educators increasingly will need to connect with prospective applicants.

Along with Mexico’s wholesale embrace of Internet technology and the contact opportunities it represents, participation in education fairs remains an effective tool for attracting Mexican students. The International Education Mexico EXPO Roadshow received more than 22,000 students for its 2013 fair, and the organisation already has a registration website up for 2014.

An even larger fair, EuroPosgrados, focuses entirely on graduate programmes in Europe. The October 2013 version is slated for three cities, Puebla, León and Monterrey, each chosen for their student population, higher education institutions, and geographical location. The fair is organised by Nuffic, DAAD, Campus France, and Universidad España.

There remain issues for the Mexican education sector and government to address moving forward.

For instance, a recent survey of over 400 universities found that only about 18% work with businesses and organisations in teacher development, and only 16% have small business incubators. Both percentages are considered to be far below optimal levels. Sergio Cárdenas, professor and researcher with Mexican-based think-tank CIDE, emphasised,

“Despite a larger budget and a greater number of government programmes to encourage collaboration, the majority of activities involving university-industry cooperation are still incomplete and a mismatch between universities and businesses in developing research opportunities persists.”

Questions about the quality of university education in Mexico have arisen in recent years. With the majority of Mexican students attending public universities, space restrictions at those schools have allowed private institutions to rush in and fill the void. Calls for the government to more strictly regulate these new private institutions and implement quality control measures may create added pressures as Mexico advances towards its goal of boosting overall tertiary enrolment.

Another obstacle is the lack of low cost, widespread Internet access. This may dampen the scale and speed of adoption for online education and recruitment techniques.

Finally, Mexico’s well-publicised security problems are also a concern. The issues there are real, with violence ensnaring innocent bystanders and even leading to exam cancellations in Guadalajara last year. For educators, agents, and students, finding partners on the ground in Mexico can help pinpoint the safest areas and ease concerns, because locals are at least able to tell a more nuanced story about safety than that heard in the news.

There are a number of associations offering information and assistance on Mexico. The following is a starter list: