Quality education is essential in the economic development of any nation. This fact is clearly evidenced from past experiences of countries/regions such as Singapore, Ireland, Korea, and the European Union during the last five decades. The Gulf Cooperation Council (GCC) member nations have also identified sound educational systems as being the cornerstone of economic progress, and taken several initiatives aimed at improving the quality (and quantity) of education over the last two decades.

A new report, GCC Education Industry, produced by investment bank Alpen Capital, foresees that the number of higher education institutions across the Gulf region will grow mainly on the back of rising enrolment rates in GCC member countries. The report includes detailed profiles of the education capabilities of Bahrain, Kuwait, Oman, Qatar, Saudi Arabia and the United Arab Emirates.

By focusing on the growth potential of the respective GCC member nations, it presents an outlook for each segment of the education sector: pre-primary, primary, secondary and tertiary education, vocational training, and special education. Further, the report includes detailed profiles and market dynamics of the six GCC nations as well as investment opportunities, merger and acquisition activities, major educational projects in the region, and snapshots of some of the well-known schools and companies operating in the sector.

The report contains some fantastic data on the US $65 billion GCC education sector, and is well worth a read. In the meantime, ICEF Monitor has pulled out a few highlights below. 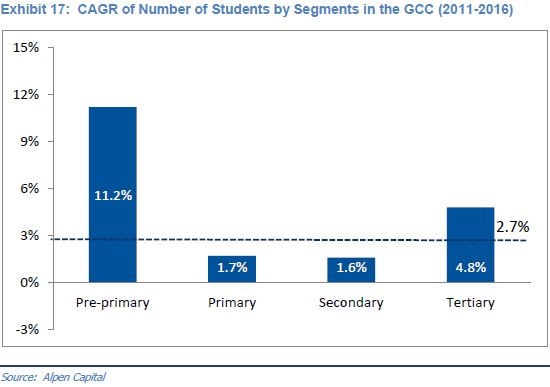 The education sector in the GCC is poised for robust growth in the future due to several factors: 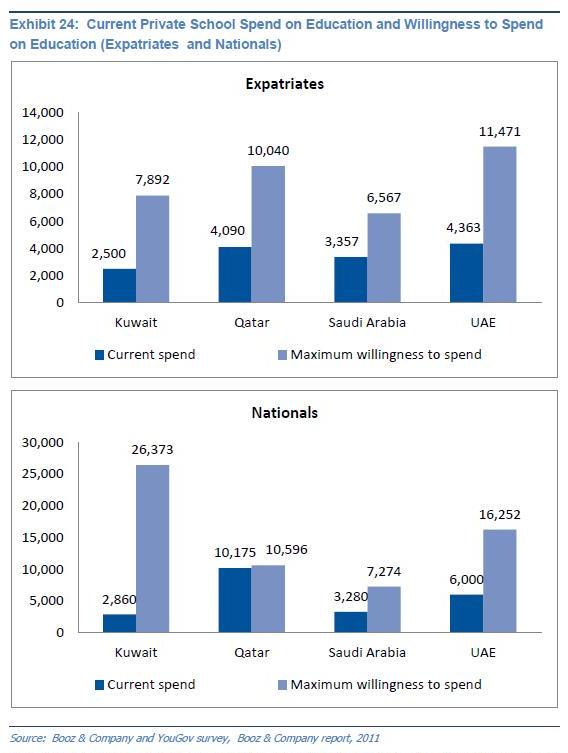 As per the Booz & Company and YouGov survey and illustrated above, the future willingness to spend on education for both nationals as well as expatriates is high. Kuwait, Saudi Arabia, and the UAE nationals are likely to increase their spend on private schools significantly as a result of growing awareness of quality education; while expatriates of Kuwait, Qatar, Saudi Arabia, and the UAE are also likely to do the same on private education. This is expected to translate into robust growth rates for private sector schools, particularly in Saudi Arabia, where private school enrolment is still very low as compared its counterparts in the GCC region.