The long-standing tradition of Class 12 Indian board exams to graduate from Indian high schools is changing – especially for many students targeting study abroad.

This year, the number of Indian student entries for Cambridge IGCSE and International A Level qualifications rose to over 27,000. That’s 20% more than in 2011.

Cambridge IGCSE (commonly known as O Levels) is one of the world’s most popular international qualifications for students between the age of 14 and 16 years, while Cambridge International A Levels are typically used by 16 to 19 year olds as a final stepping stone to university. Today, more than 9,000 schools in 160 countries take part in the programmes. 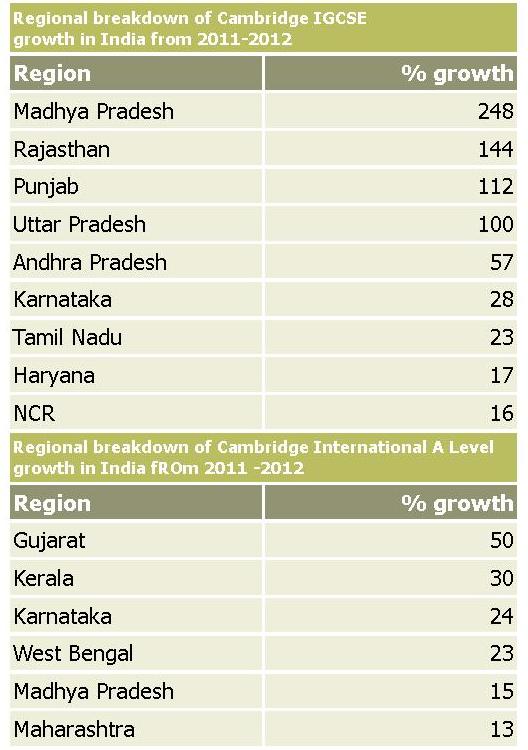 A recent post from Overseas, Overwhelmed points out that recruiters who have been coming to India for a decade will notice the significant change. O and A Levels were once unheard of in almost all secondary education circles. Today they are catching a wave of attention, especially among parents in the upper economic classes of Indian society.

There are already almost 300 Cambridge schools in India, with the most popular core subjects being math, physics and chemistry (engineering is the programme of choice for wealthy Indian families sending children to university abroad). Indian states with the largest growth since 2011 include a surge in interest for Cambridge IGCSE in Madhya Pradesh (247%), Rajasthan (145%) and Punjab (112%). Meanwhile, Cambridge International A Level numbers grew by 50% in Gujarat, 30% in Kerala and 24% in Karnataka.

“The increasing number of students taking our qualifications in India shows that schools are aware of the value of this approach and the importance of an international education in the global economy,” said Andrew Sortwell, regional manager for South Asia, University of Cambridge International Examinations.

Meanwhile, the Hindustan Times has announced that higher education in India is set for a boost with the Human Resource Development (HRD) Ministry finalising plans worth Rs800 billion (US$15.2 billion) to improve access to colleges and universities.

The Indian government has embarked on an ambitious plan to double the gross enrolment ratio from the current 17% to 30% by the year 2020. For this, an abundance of new universities and colleges are needed across the country.

HRD Minister Kapil Sibal declared that 200 new universities (100 of which will be community colleges) and a degree college in each district in India will be opened by 2017. In addition to new institutions, many existing colleges will be upgraded – either into universities or autonomous colleges with degree-awarding powers. The Rs800 billion allocation will be the biggest ever allocation for higher education.

A large amount of this money will be awarded to state governments to improve higher education in rural areas and give better access to schools for girls and other socially deprived sections such as scheduled castes and scheduled tribes.

In addition, The Chronicle of Higher Education just reported that these ambitious plans will require extensive corporate support. In addition to increased contributions from companies, a new report recommends the government give land free for 999 years to private entities to set up educational institutions, academic facilities and technology parks.

“The existing higher education system in India lags in comparison to global standards and is inadequate to meet the demand. There is a need to engage the corporate sector to invest in existing institutions and set up new ones,” said N.R. Narayana Murthy, leader of a government-sponsored committee and founder of Infosys.