Student arrivals down in Malta but ELT sector resilient

Malta’s top language schools congregated earlier this week for the presentation of detailed studies and analysis for the Maltese language school sector. Both the 2011 APS Bank, FELTOM ELT Industry Survey Report from Deloitte as well as related data from Malta’s National Statistics Office were shared.

Now in its second year, the industry survey is an annual project of the Federation of English Language Teaching Organisations Malta (FELTOM). FELTOM was established in 1989 to promote professionalism within the language learning industry. Its 17 members represent approximately 80% of all student arrivals in Malta; fifteen of these members participated in the annual survey.

Alex Fenech, FELTOM President, summarised 2011 as, “A difficult year for Malta’s ELT industry. The reduction of the scholarship granted to Spanish BECAS MEC students travelling to Malta has impacted our industry substantially. Events in Libya early in the year also lead to a number of cancellations of junior groups.

“Notwithstanding these adverse conditions, the industry still managed to record its fourth best year ever in terms of student numbers. For 2011, schools reviewed their marketing strategies to replace lost business with new students from established markets such as Russia and emerging markets such as Turkey, Japan, Brazil, and others.” 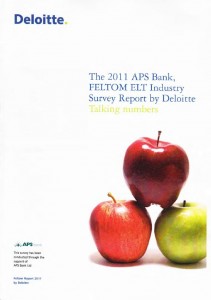 However, an increase in the average length of stay for international students in Malta (3.95% from 2010 to 2011) meant that total student weeks booked remained more or less flat from year to year.

As expected, Italy, Germany, Russia, France, and Spain were the leading sources of international students for Malta in 2011. Italy, Germany, and Spain registered declines in 2011 with both Russia and France showing increases over 2010. Austria has also shown marked increase recently, and numbers are increasing from Turkey and Brazil as well.

The junior market is particularly strong in Malta but is heavily reliant on the summer season. The adult language market is not as prone to seasonal swings and produces a steady stream of students throughout the year. NSO data from 2011 shows that 27,197 students – 39% – were aged between thirteen and seventeen, while 2,741 students – 4% – were under the age of thirteen.

Fenech highlights, “Our industry is responsible for approximately 5% of tourist arrivals in Malta, however, when one considers that average length of stay for students amounts to 18.4 nights, as compared to 8.3 nights for the average tourist, the ELT industry accounts for approximately 11% of tourist bed nights.

“These numbers become more considerable in the case of emerging tourist source markets. Our students account for 34.6% of tourist arrivals from Russia, 32.9% from Turkey, 41.1% from Korea and about 20% from Ukraine, Czech Republic, Slovakia and Brazil.”

It is these secondary markets which hold the most potential for growth and as such, FELTOM acts as an interlocutor with several authorities, including various Government Ministries, the Malta Tourism Authority (MTA) and a number of stakeholders. This active outreach and engagement has bolstered the island’s reputation as an attractive study destination. Additionally, FELTOM works tirelessly with the MTA and government authorities to ensure that pathways are open for growth, namely in the areas of transportation and visa regulations.

MTA Chief Executive Josef Formosa Gauci, also present at the session, noted the importance of open communication between the MTA and FELTOM. For example, if schools are focusing their recruitment efforts on certain countries, they need the MTA to ensure flight routes are in place. Likewise, if the MTA is negotiating air routes with particular cities, the schools need to be aware of this increased mobility potential.

Essentially, the more they focus their efforts in the same direction, the great the gains for all.

Raphael Aloisio, leading Financial Advisor from Deloitte, echoed this sentiment: “Always try to work together on initiatives; the gains will be significant when you join forces.”

Aloisio was careful to caution FELTOM’s members against price cutting following 2009 when the market was suffering from a decline in student bookings. He praised the schools for agreeing amongst each another to hold firm on prices and concentrate instead on cost cutting and strong ROI from marketing initiatives.

Those efforts have clearly paid off; 2011 results show that despite a decline in overall student arrivals, gross operating profits ballooned from 3.73 million EUR in 2010 to 5.54 million in 2011 on the strength of longer average stays and higher revenue-per-student values.

It’s difficult to predict how 2012 will perform due to the buying behaviour of Malta’s main sending markets. Students from Italy, Germany, Spain, Russia and France account for 68.7% of total student arrivals, and they often book late. However, the overall mood in the room was a positive one, with many schools concentrating on emerging markets, continued cost controls and creative initiatives such as new programmes. And with another new school opening just days ago on the island, it’s clear that Malta is holding its ground in the education industry.

Finally, due to the influx of students from secondary markets in Latin America and Asia, schools are starting to see a shift in enrolment patterns, with less reliance on the summer season. In the past, it wasn’t uncommon for schools to receive 75% of their total students in the summer, whereas now, that figure has come down to about 50%. The shoulder seasons are strengthening and schools are refining their marketing skills in promoting Malta year-round.