A significant majority of Canadian universities – 82% – now place internationalisation among their top five strategic priorities, says a new survey of Canada’s degree-granting institutions. This represents a 5% increase over a previous survey in 2006, and leads a broad set of findings that all clearly point to an increasing emphasis on international programmes and services among the country’s higher education institutions.

When asked to identify their main reasons for prioritising internationalisation, 53% of Canadian universities say that “preparing internationally knowledgeable and interculturally competent graduates” is their top motivation. The other most-cited reasons are “building strategic alliances and partnerships with key institutions abroad, promoting an internationalised campus, increasing the university’s global profile, and generating revenue.”

The survey was carried out by the Association of Universities and Colleges of Canada (AUCC) in May 2014 and generated an 80% response rate among the 97 universities and degree-granting colleges within the AUCC membership. AUCC released its detailed findings in December 2014.

“Not since our last survey in 2006 has there been such a comprehensive view of AUCC member institutions’ engagement with the world beyond our borders,” said Paul Davidson, AUCC’s president and CEO. “The responding institutions together represent more than 85% of all Canadian university students and perform roughly 92% of the university research funded by federal research granting agencies.”

As the following chart reflects, boosting student mobility – both inbound and outbound – remains the top priority of Canadian institutions. A full 45% of respondents indicated that undergraduate recruitment was their top priority, and a further 7% noted graduate recruitment as their top international goal. While “expanding outbound mobility” was noted as the top priority by only 4% of respondents, a notable 74% of responding institutions also cited it as a top-five priority. 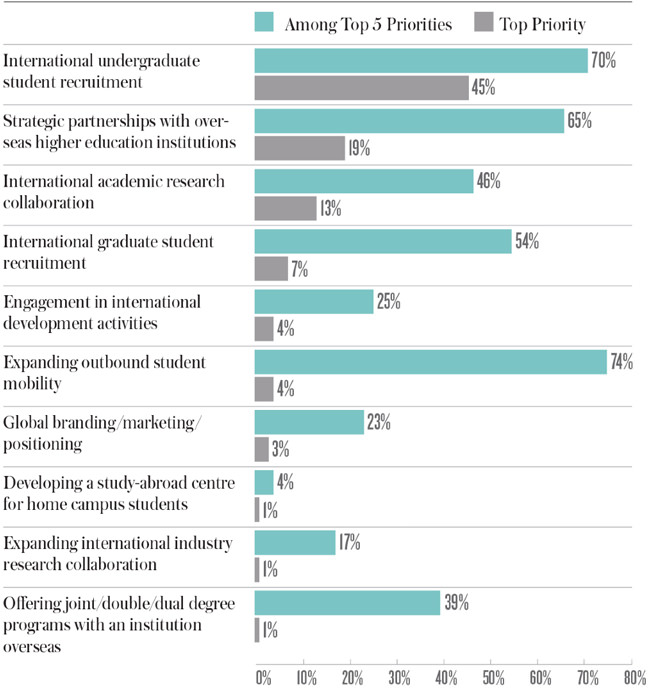 Building international partnerships, whether for joint programmes, collaborative research, or otherwise, is the second broad priority focus of many Canadian institutions. The preceding chart shows a number of different categories of collaborative initiative that, in combination, make up the top priority for 37% of survey respondents.

In terms of international markets, China is far and away the primary focus of Canadian institutions. The world’s leading education market was cited by 88% of responding institutions as a priority in their internationalisation efforts. Brazil, due in part to the prominent Science Without Borders programme, appeared as the second most-cited priority market at 65%. 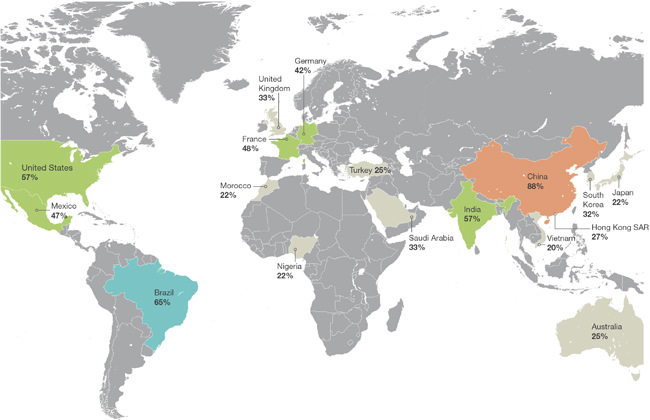 Following those two clear leading targets were two further groupings of international markets: a “medium frequency” group cited by 40-59% of respondents (and including such markets as the US, India, France, Mexico, and Germany) and a “medium-low frequency” grouping reported by 20-39% of Canadian institutions (and including targets such as Saudi Arabia, Vietnam, Turkey, the UK, and Nigeria).

The AUCC report also makes some interesting observations with respect to international partnerships and outbound mobility, particularly in relation to the 2006 survey.

A majority of Canadian universities (57%) report having expanded international partnerships, in terms of both quality and quantity, over the past three years. Another 13% indicate that they “substantially expanded” their partnership portfolio over this period. 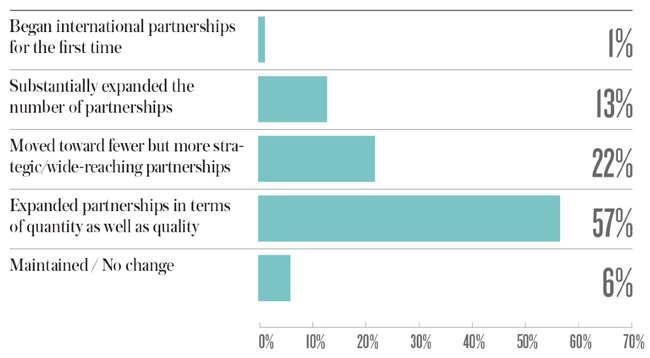 Picking up on the growing importance of transnational education (TNE) in other major host countries, AUCC finds that 15% of Canadian universities enroll degree students in programmes delivered offshore at the campuses of international partners. A further 9% deliver programmes at their own international branch campuses and another 6% are now working to develop such programmes offshore.

But if the volume of TNE programming and international partnerships has leapt ahead for Canadian universities, the number of Canadian students studying abroad most certainly hasn’t. AUCC finds that only 3.1% of the country’s undergraduate students (about 25,000) had an international experience in 2012/13 and only 2.6% earned academic credit for their experience abroad. This is virtually unchanged from 2006 when the last AUCC survey found that 2.2% of Canadian undergraduates studied abroad for credit.

And this is in spite of another 2014 finding: that 97% of Canadian universities offer international experiences to their students and, of those, nearly all enable students to do some academic coursework abroad. 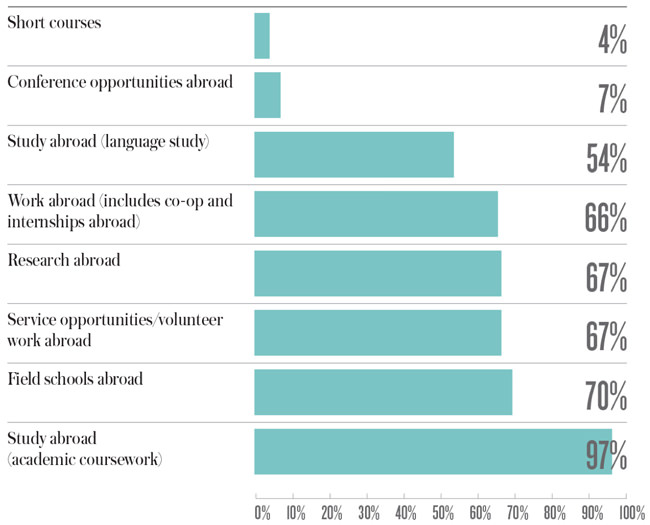 Many Canadian universities (54%) cite a lack of funding support for study abroad as the main barrier preventing students from going overseas. Nearly half (49%) noted inflexible (or too demanding) curricula at home as another significant barrier, and 39% gave “students’ lack of interest or recognition of benefits” as the most important reason.

There is an apparent mismatch between Canadian institutions’ stated motivation for internationalisation (preparing internationally competent graduates) and the lack of growth in outbound mobility, particularly given that many of the barriers noted above can be influenced by the universities themselves.

Also of note in this respect, AUCC finds that few institutions have established specific goals with respect to outbound mobility.

Only 23% of responding universities reported having set targets for the number of students they would send abroad, and most often those targets relate to undergraduate rather than graduate students.

“This survey shows that Canada’s universities have broadened and deepened their international activities and are leading the way for Canada to engage the world’s most dynamic economies like China, India and Brazil,” adds Mr Davidson. “However, the global knowledge economy requires employees with the kinds of skills and competencies gained through global study experiences. Unless Canada takes action now to ensure its students have more opportunities to live and learn in another country as part of their university education, Canada risks losing its competitive position in the world.”