Students’ demands – as well as a rapidly evolving global marketplace – feature significantly as drivers of the technologies most likely to be adopted in universities and colleges around the world over the next five years, according to the latest NMC Horizon Report.

This year the report, NMC Horizon Report: 2016 Higher Education Edition, developed in partnership with the EDUCAUSE Learning Initiative, was borne out of the discussions and research of 58 higher education experts across five continents and 16 countries. The report series itself has been running for more than 14 years, and is “the world’s longest-running exploration of emerging technology and uptake in education.”

The 2016 report addresses itself to a formidable challenge, noting:

“As educational technology is rapidly advancing and evolving, it is difficult to always discern when and how to properly implement it to foster real transformation.”

Certainly universities and colleges around the world are familiar with this challenge, and so it’s interesting to see the timeline on which the report pegs various emerging technologies – from BYOD (Bring Your Own Device) initiatives to blended learning and virtual reality – according to their likelihood of substantially changing the shape of higher education. 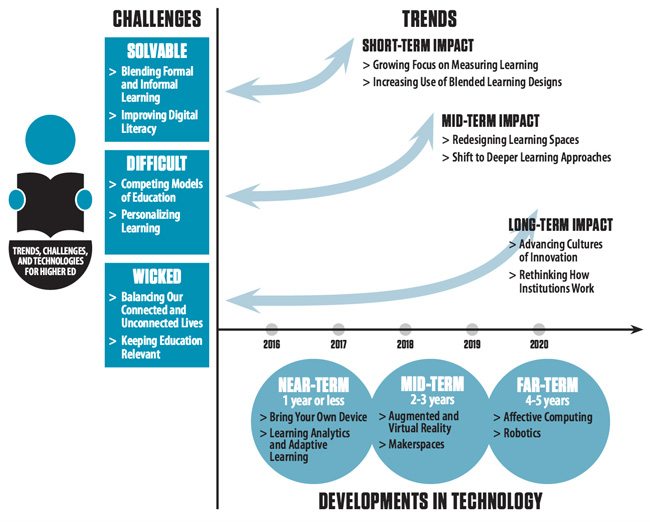 A summary of technology-related trends and challenges for higher education institutions through 2020. Source: New Media Consortium/EDUCAUSE

Focusing on the short term, the greater blending of informal and formal learning is considered to be a major trend that is already underway. The report uses the example of marketing students at Indiana University using Instagram to explore and share successful campaign ideas, and also looks at cases where universities are allowing students’ prior work/life experience to influence curriculum design.

Similarly, the report considers these technological innovations to be already shaping – or about to make a significant impact on – the way higher education is delivered:

These are mapped out along the “one year or less” end of the five-year timeline.

A little further in the future – two to three years – adoption of virtual and augmented reality as well as the reimagining of physical spaces for learning including the new concept of “makerspaces” are projected to exert a major influence on the shape of education.

The report’s experts estimate that affective computing (technologies that recognise and simulate human affect including empathy) and robotics may shape mainstream higher education toward the outer five-year mark.

Drivers of tech adoption in education

Common to all the technological innovations/disruptions is an understanding that higher education is on its way to being fundamentally reimagined. This is a result of:

Regarding that last point, the report cites a study among 500 students by higher education-oriented technology firm JISC that found that technology impacted university choice for 32% of students.

“Students have expectations that higher education will mirror the information accessibility and immediacy of their connected lives.”

This is just one of the reasons that global enrolments in MOOCs surpassed 35 million in 2015. The user base for MOOCs roughly doubled in 2015 from what it was in 2014.

The report astutely observes that the adoption of emerging technologies in higher education comes down to an interplay among three points: policy, leadership, and practice. For example, analysts and researchers working in the higher education field have for several years been warning that the traditional university model is not sustainable, for all the reasons mentioned above and more. The NMC Horizon Report: 2016 Higher Education Edition notes that:

“Rethinking how institutions work is a long-term impact trend that requires governments to prioritise major education reforms that help colleges and universities structure themselves around increasing the employability of their students.”

In other words, this “impact trend” will not take full hold until national governments embrace it and enact policies to support institutions in reshaping themselves to better suit student demands. Over the past several years of reporting, we have seen increasing examples of governments moving in this direction, but the NMC Horizon report estimates that a large-scale movement that rethinks university and college structures is still some ways off.

Looking at the importance of leadership, the report notes that the ability to provide “deeper learning approaches that favour hands-on and student-centered experiences” is dependent on institutions being able to “prepare instructors for new roles as guides and mentors.”

And then we come to practice, where institutions’ level of success at remaining relevant to students’ changing expectations – e.g., related to technology and employability – depends on the environments they create for learning. The report refers to the most promising environments as “cultures of innovation,” which entail “deviating from hierarchical decision-making processes to promote collaborative strategies and incorporate student voices.”

The report cites several examples of cultures of innovation. Some of these hinge on an interdisciplinary approach to learning (e.g., involving several faculties/instructors in a programme of study). Others incorporate a recognition of how students are increasingly drawn to entrepreneurial careers into the way programmes are delivered. The report notes that,

“In the US alone, the number of formal entrepreneurial courses in higher education has grown exponentially over the past two decades with nearly 25% of today’s college students aspiring to be entrepreneurs.”

The NMC Horizon Report: 2016 Higher Education Edition notes that new educational models such as hybrid learning and competency-based education (which awards credit to students based on their demonstrated competencies) have the potential to greatly affect the sustainability of institutions. This is because they allow an institution to:

Just as promising is the “Education-as-a-Service” (EaaS) model, which is “a delivery system that unbundles the components of higher education, giving students the option to pay for only the courses they want and need.” One of the experts consulted for the report contends that the EaaS model paves the way for a “customer for life” mentality that “will retain students through services that make their skills obvious and accessible to their employers, making their return on tuition investment more immediate.”

The “customer” characterisation here – as opposed to “student” or “learner” – is bound to generate discussion all by itself. But the notion of attracting and retaining a “customer for life,” for most educators, is nevertheless a very compelling idea indeed.