The Australian government has introduced new amendments to key education legislation, elements of which will affect both foreign students and education agents.

Introduced on 1 June 2017, the Education Legislation Amendment (Provider Integrity and Other Measures) Bill 2017 aims to amend the Education Services for Overseas Students Act 2000 and the Tertiary Education Quality and Standards Agency Act 2011. The overall effect will be to strengthen the registration requirements for higher education providers in Australia.

These measures are clearly aimed at large operators in the vocational education and training (VET) sector. There have been growing concerns in Australia in recent years around aggressive recruiting by private VET providers in conjunction with generous loan programmes for domestic VET students. Some of the largest private providers in Australian VET have attracted hundreds of millions of dollars in loan support but with the vast majority of students failing to complete their intended programmes. 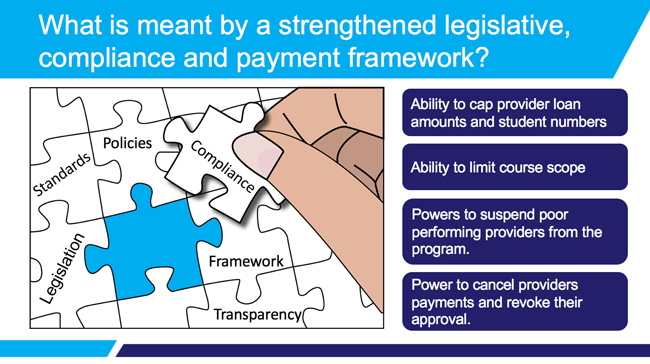 A presentation slide summarizing some of the key changes under Australia’s new VET loan programme. Source: Government of Australia

In the months since, one major provider, Careers Australia, has fallen into voluntary administration – that is, the company is insolvent and under the administration of third party that will attempt to restructure its financial obligations. Another, Acquire Learning, was fined AUS$4.5 million late last month for “unconscionable conduct through unfair sales tactics” and “undue pressure and false or misleading representation.”

All told, an estimated 45,000 VET students have been displaced from failing institutions, and will now need to transfer to other colleges in order to continue their studies.

It is unclear how many of those affected are international students but the VET sector accounts for a significant share of overall foreign enrolment in Australia. Second only to higher education in 2016, VET represented 26% of total foreign enrolment during the year with 12% growth over 2015. A changing VET landscape in Australia, therefore, necessarily bears on the capacity and programme options available to overseas students.

With its new legislative amendments, the government is also clearly aiming to curb the entry of suspect VET providers into the higher education space, and also to secure new powers to deal with poorly performing providers. As a recent report in The Australian illustrates, there is in fact considerable overlap in private-provider ownership across the two sectors.

“As VET providers look for alternatives to their trouble-plagued sector,” notes the paper, “they comprise most applicants for initial registration from the higher education regulator, the Tertiary Education Quality and Standards Agency (TEQSA).”

“Given that half the providers within higher education are now dual-sector, it’s a risk to which TEQSA is very alert,” said TEQSA Chief Executive Anthony McClaran. “When we’re considering the overall risk to a higher education provider, we also take into ­account any knock-on risks from their position in the VET sector.”

The Australian further explains that TEQSA’s risk framework includes two criteria related to providers’ financial viability, and that the agency has “significantly expanded” its ­attention on financial risk “because of these cross-links to other parts of the wider education sector”.

In a related statement, Minister for Education and Training Simon Birmingham characterised the legislative amendments as a, “pre-emptive strike” against the bad actors that the government has moved to exclude from public loan programmes.

No opt out for agents

In a departure from a previously announced plan for a new system of agent performance reporting, the 1 June legislative amendments make no mention of anticipated “opt out” provisions for agents. It now appears that all agent-related performance data will have to be shared within a new tracking system.

“Reporting on agent performance, and publishing data as appropriate, will promote greater transparency and accountability in educator-agent relationships and the wider sector.”